Is trust in advertising dead?

Trust in Advertising is at an all-time low, having halved from 50% to 25% since 1992, a Credos study found. This won’t come as a surprise to some, considering the flurry of disastrous high profile advertising campaigns in recent years, from the likes of Fyre Festival, which was built entirely upon a lie, to the controversial Pepsi ad featuring Kendall Jenner, which was criticised for co-opting the Black Lives Matter protests for commercial profit.

So what has gone so wrong in advertising?

President of the Advertising Association, Keith Weed, recently noted that 69% of people no longer trust advertising. He commented “trust is a crucial component of advertising. A brand without trust is simply a product; you cannot have one without the other. And there is much that we can do to rebuild trust among the public towards advertising.”

There are several issues that have had a negative impact on consumers’ perceptions of advertising.  Bombardment is said to be the biggest concern for the public. The sheer volume of ads consumers are seeing daily said to be at ten thousand, understandably leads to the skipping and blocking of ads. The repetitiveness, irrelevance, and obtrusiveness of many ads are also all seen to be problematic. Statistics from Nielson exhibits this understanding, with only 33% of the public trusting display ads served to them on their mobile phones.

The intrusiveness of advertising is also cited as a contributor to the decline in public trust. Intrusiveness is said to be when advertising is present in areas consumers consider to be private places, or, indeed, when consumers are individually targeted in ways considered to be exploiting personal data, which is considered ‘creepy’. Other consumers suggest that it’s problematic how advertisers are using manipulative techniques that target vulnerable groups, such as those with addictions.

But can trust in advertising be rebuilt?

Despite these alarming statistics, it’s not all bad. It should be noted that consumers do still appreciate that advertising has its benefits, and see it as a force for social good, as well as representing progressive social values.

As a result of the concern about the decline in trust, the Trust Working Group was born at the Advertising Association. With members hailing from the likes of media agencies, media owners, and tech platforms, their mission is to rebuild the connection between advertiser and consumer, in an attempt to repair the broken trust.

The results of the Credos study has put the notion of diminishing trust in advertising into the forefront of people’s minds and encouraged change, as Paul Bainsfair, director of IPA states “this study gives us the chance to look at how we can change the perception of advertising for the better to truly reconnect and re-engage with the public”.

The Trust Working Group (TWG) has vowed to tackle bombardment, already encouraging key industry players to adopt the IAB UK Gold Standard. Equally, they aim to highlight how advertising can drive social change, through the likes of encouraging a woman to undergo cervical screening.

So (thankfully) we can see that trust in advertising isn’t dead altogether. The statistics have highlighted that consumer trust is low, but there is still an appreciation of the positive work the industry produces and work being done to remedy the trust deficit through the likes of initiatives such as TWG. Ultimately, Weed points out, “great advertising is the best builder of trust”, and as an industry, this is what we need to be striving for. 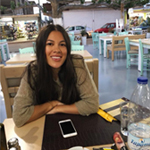 Mei joined Total Media this year. She studied Linguistics and Sociology at Newcastle University and has quickly become known around the office for her great travel tips and love of food.