Our day at the PPA Festival

Jake and I attended the PPA Festival in May and listened to a range of interesting presentations on the publishing and media world, by professionals and people who know the industry inside-out. We listened to a wide variety of people, including Jeremy Wright, the Secretary of State for Digital, Culture, Media and Sport, who passionately spoke about how important media and advertising is, not only the economy but also for the whole population. In total, we attended ten different talks throughout the day and in our opinion, here were the highlights:

Where’s Your Head At?

Our favourite session was ‘Where’s Your Head At?’ a discussion between Lucie Cave (Editor in Chief – Bauer) and Natasha Devon MBE (Writer/Campaigner). Together, the pair created the campaign ‘Where’s Your Head At?’ calling upon all employers and MP’s to support the Workplace Manifesto, and for everyone to sign the petition for a law to be put in place to have at least one Mental Health First Aider in every workplace and school.

With Lucie Cave being the co-creator of this campaign, she increases potential for how well-known this movement can be. Bauer is one of the leading magazine publisher companies in the UK. Putting all the titles they cover together, they reach an audience of over 25 million. Therefore, having a senior employee from such an influential company on this campaign opens the audience up massively. Thus giving ‘Where’s Your Head At?’ a much larger platform to engage an audience and create more awareness.

With Mental Health Awareness Week increasing the discussion around mental health, it is important not to solely focus the issue around social media. Despite social media having a very big impact on mental health,  people often forget that stress in the work place is one of the biggest factors contributing to poor mental health.

Lucie and Natasha discussed how little mental health is talked about in a corporate environment. This was backed up by the fact that before this session even began, around two thirds of the room had left. Although this really shocked us, it highlighted that this subject is sometimes still avoided. A humorous remark was made that if this talk was on something about making money, the room would be filled as that is often a company’s main objective.

The reality is that one in six people in the workplace do experience a mental health illness in their lifetime, but the stigma around it often makes people reluctant to admit and speak openly about it.

A study by ONS. (2014) found that 12.7% of all sickness absence days can be attributed to mental health conditions. However, this does not include the days taken off in which people do not admit it is being due to mental health – Natasha mentioned how workers would rather tell their boss they have diarrhoea than depression.

There has most definitely been an increase in people opening up and speaking, but now more needs to be focussed on giving the practical strategies to dealing with the issues people face. The training for Mental Health First Aiding provides this and encourage support all around the office.

The future of Newsbrands & publishers

Paywall’s have become more prominent within Newsbrands and how they can monetize journalism after being hit by the digitalisation of society. From a consumer point of view this concept can come as a shock or be very irritating as you’re interested in reading the content available. However, from a Newsbrands perspective, if you are that engaged with the content they produce then you should be paying for this service, as previously you would have had to buy the Newspaper to be able to access their content.

To start we were proposed with the idea that subscriptions are becoming more of a global trend with the introduction of Netflix & Spotify Premium. Both of these subscriptions offer an enhanced user experience displaying the reasoning for paying extra for a particular service, for example, removing adverts from Spotify or allowing for the content to be downloaded. There were some interesting benefactors for Newsbrands and consumers which enhanced consumer relationships and brand loyalty with the Newsbrands. A speaker from a Newsbrand in Sweden demonstrated what business implications a paywall had to their organisation. They saw an increase in registrations to their site with a modest increase in conversion rates with the audience having a higher engagement with the brands content.

With the Newsbrand developing in subscriptions and driving traffic to the site they had to design a way to ensure they continued to keep consumers interested in their content and show the benefits of being a subscriber to the Newsbrand. They designed a piece of software which would be able to determine if a particular article should be paid for or free to view. This ensured that people would be able to entice consumers to engage with the content available but kept the premium content to members. Extra benefits that will continue to bring people to the subscription will be special features from external journalist and exclusive interviews. There was also a test in offering members the chance to watch specific sports events which weren’t available through other channels.

Can robots write the news?

A joint venture between PA & Urbsmedia has brought some innovative technology which will simplify journalism for small local newspapers around the country; the project is called RADAR (Reporters And Data And Robots).

The process starts by amalgamating data sources across the country differentiated by cities or counties. From here a group of journalist’s build a template of general comments around positive or negative outcomes which can then be applied to the outcome of the data points collected previously. The system will then connect the dots with the comments created by the journalists and the data points specific to the town. From this the editor of the local newspaper can use generic quotes from figure heads in the community to bolster on the story. Previous stories that have been created using this service have been about speeding drivers being caught & general crime stories. This can then be expanded into front page flashes & potentially tested across sports content. Since this service has been available they’ve created over 150,000 articles with an average of 12,000 a month.

You can read more about the PPA Festival here: https://ppafestival.co.uk/ppafestival2019/en/page/home 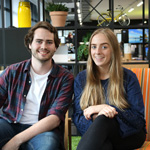