#5 Social proof: if a behaviour appears commonplace, it will become more appealing

Social proof is the idea that when people make a decision, they are influenced by what they think the common course of behaviour is. If a behaviour is made to appear popular it will become more popular still.

Evidence:  In 2011, the Behavioural Insights Team (BIT) and HMRC, tested a variety of social proof messages on the effectiveness of tax repayment rates among 140,000 UK taxpayers. 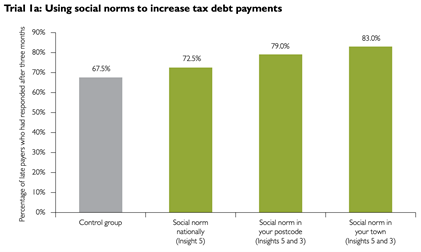 Beyond this research, social proof has been demonstrated in a broad range of settings (e.g. charitable donations, music downloads, restaurant choices, even things like smoking). In fact, a recent global study by Google into 31 product categories compared the relative effect of six biases. They found that for 28 of the 31 categories social proof was either the most powerful, or second most powerful, of the biases tested.

Recommendation: This bias suggests that if we want to change behaviour it is often more effective to stress how commonplace the desired behaviour is, rather than providing people with a list of reasons to change.

The HMRC experiment hints at an interesting nuance too. It suggests that social proof is most powerful when tailored. Where possible, you should adjust the social proof claim to the customer’s demographics, such as their age or location.

Behavioural Science wizz and author of The Choice Factory, a best-selling book on how to apply findings from behavioural science to advertising and founder of Astroten.