The Recent Ban of Harmful Gender Stereotypes in the UK

As a young female professional, I am very grateful that a woman’s role in society has evolved tremendously over the years. And progress doesn’t only benefit women; it is undeniable that young boys are under significantly less pressure than previous generations to succumb to unfair expectations of what society defines as ‘Being a Real Man’. Progress has come a long way and gender barriers are slowly coming down, giving the opportunity for everyone and anyone to act, think and feel the way they want to and are meant to.

As society is progressing and gender norms are becoming increasingly obsolete, it is imperative for the advertising industry to follow suit and boost positive representation. Indeed, advertising plays a very important role in affecting people’s perceptions of society and of themselves. For a very long time and – as some might argue – until present day, the advertising industry has contributed in depicting and reinforcing gender stereotypes. In fact, research suggests that the presence of clear gender roles in advertising normalised certain harmful behaviours in the real world. For example, by positioning home appliances as a woman’s sole path to self-actualisation and fulfilment, or, for instance, creating a range of ads that cultivate a man’s ego in detriment of a woman’s well-being, to name a few, advertising has had a strong role in shaping and strengthening defined gender roles.

While the use of gender stereotypes in ads is a very current conversation globally, it has been the subject of great buzz within the UK specifically. In fact, the UK’s Advertising Standards Authority (ASA) has recently taken a significant step forward in terms of gender representation in advertising. The Committee of Advertising Practice (CAP), which is part of ASA, has unveiled new evidence that suggests that the use of harmful gender stereotypes limits people and restricts them from following their true aspirations (e.g. applying for a certain job/working in a certain industry), which in turn affects the economy! As a result, in December 2018, it has announced the official ban of harmful, offensive gender stereotypes in British ads; expecting this rule to come into effect around June/July 2019 (present day). It is important to note that not all gender stereotypes will be banned, but those likely to cause harm and inequality in society will. CAP published a guide to advertisers outlining the types of stereotypes that would be prohibited and some examples include banning ads that portray men as inept to change baby diapers or women as unable to park cars. Due to advertising’s role in affecting behaviour and in acting as society’s mirror, this rule represents a stepping stone in building an equal, open society.

Although this regulation is undeniably a great initiative, there are a few behavioural limitations that could affect its agile application, predominantly concerning the definition of what is ‘harmful’. While CAP has prohibited a number of gender-related contexts that are unquestionably harmful, we live in an ‘everything is offensive’ cultural age where people are unable to draw the line on what is truly harmful; an age where anything could be turned into passionate debates and severe backlashes.

Additionally, integrating this regulation as part of the marketing communications process, which is primarily driven by the Encoding/Decoding model of communications, sheds light on a core behavioural challenge in its regard. Indeed, each individual encodes (builds) and decodes (interprets) information differently, primarily based on the unique associations that are embedded in each person’s brain. For instance, one derives meanings from an ad based on their cultural background, personal experiences and education, to name a few. This suggests that there could be endless interpretations regarding the level of harm that a gender role carries within an ad. For instance, although an agency or brand has encoded an ad by following CAP’s guidance and in a way that a team’s collective agreement perceives it as being entirely inoffensive to any gender; a minor aspect of it could lead some viewers to decode the ad as extremely harmful. Taking this a step further, the simple presence of pre-conceived, negative associations towards a specific brand in a person’s mind could affect the way they interpret any sort of gender portrayal coming from that source.

Despite the passionate nature of modern society and the underlying bias within humans, which together translate into the subjective interpretation of gender representation in ads, I am strongly hoping for the smooth implementation of this rule. This regulation is a long-awaited, wonderful initiative and the start of great learning curves for all stakeholders involved. It will definitely be exciting to watch it unfold and progress within the next couple of years! 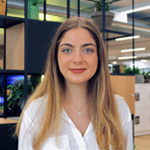 Originally from Beirut, Lea is an International Account Executive at Total Media and has worked in the Dubai advertising world prior to moving to London, where she pursued her master's degree. She holds an MSc (Master’s in Science) degree in Strategic Marketing from Imperial College London.

How using #behaviouralscience can increase donations to #foodbanks